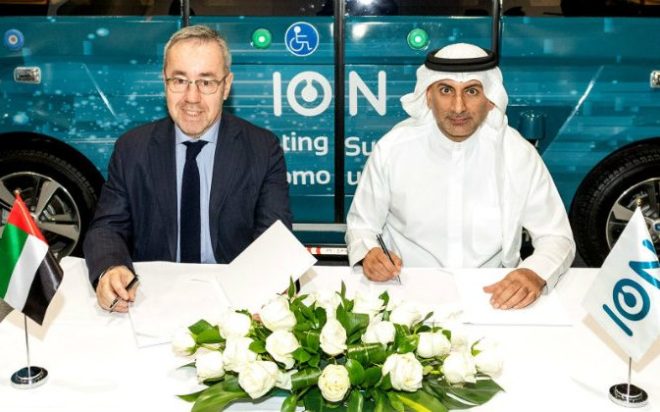 Abu Dhabi, United Arab Emirates – 13 January 2020: ION, the UAE-based sustainable and smart transportation company, has partnered with NAVYA, a leading company in autonomous driving systems, to operate and maintain the company’s electric and autonomous shuttles as well as promote its vehicles and related activities in the UAE and the GCC region. As an official distributor, ION will engage with NAVYA’s existing and new customers on sales and after-sales support.

The AUTONOM SHUTTLE fleet offers effective first- and last-mile transportation solutions, with optimized navigation and safety features. The autonomous shuttle also uses advanced guidance and detection systems and is enhanced with deep learning technology. Already operating in Masdar City since October 2018, the shuttles are also wheelchair-accessible and have a capacity of 15 passengers.

Commenting on the occasion, Khaled Al Huraimel, Group CEO of Bee’ah and member of the Board of Directors at ION, said: “Our partnership with NAVYA stems from our commitment to revolutionize transportation in the Middle East region, making it greener and smarter, which is key to a better quality of life for cities and communities. This partnership will help ION on its journey towards environmental sustainability and the development of a zero-emissions transportation network in the UAE and wider region.”

“ION’s purpose is to help create a sustainable transport infrastructure in the MENA region and beyond,” said Samer Choucair, Director, CE-Creates. “Since launching ION with Bee’ah in 2018, we have successfully trialed the use of electric vehicles in shared fleets and now we plan to expand operations to other emirates. With NAVYA, we are bringing the concept of shared autonomous transport to the MENA region for the first time.”

“NAVYA is excited to work with our partners at ION in the GCC region, starting in Masdar with its AUTONOM SHUTTLES, a globally proven first-and-last-mile transportation solution in operation around the globe. Masdar is an ideal environment to showcase the ways in which driverless vehicles integrate seamlessly into our everyday lives,” said Jerome Rigaud, COO of NAVYA.

ION’s technicians are currently undergoing rigorous training with NAVYA experts to ensure models of the AUTONOM SHUTTLE operating in the region provide a regular, dependable service.

ION is a joint venture between Bee’ah and CE-Creates, the business incubation platform of Crescent Enterprises. Through innovations in green mobility, ION is working towards zero-emissions transportation infrastructure in the region. Fast gaining a reputation for its work, ION was appointed the Official Transport Partner for major events in the UAE including the World Future Energy Summit 2019 and the 24th World Energy Congress 2019, hosted in Abu Dhabi.

Established in 2018, ION is a UAE-based sustainable transport company, formed as a joint venture between Bee’ah and Crescent Enterprises. Through innovations in green mobility, ION is promoting economic and environmental sustainability, and driving on-demand availability in multi-modal, inter-urban, transport networks. Consistently ensuring high quality and product safety in all applications, ION is creating a zero-emissions transport infrastructure in the MENA region and beyond. ion.ae