Keolis and Navya take a new step in autonomous mobility with the entry into service of their first shuttle without an onboard safety operator, in Châteauroux, France

Posted in Press releases the 19 October 2020 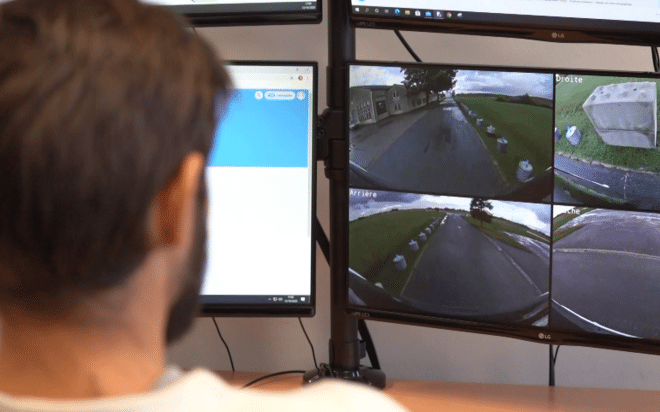 Keolis and Navya, partners in autonomous mobility since 2016, have launched their first fully autonomous shuttle service at the French […]

A decisive step towards a fully autonomous service

Since June 22th, 2020, the shuttle new-generation “Autonom® Shuttle Evo”  has been in service at the CNTS, where is located the Keolis Autonomous Mobility Test Site, allowing  athletes and visitors to use the shuttle service from the parking lot to the reception area and shooting areas during competitions.

With a length of 1.6 km, the shuttle runs at a maximum speed close to 15 km/h. It operates in a closed site within mixed traffic, including one stop sign and intersections. To optimize the shuttle’s integration with its surroundings and to operate safely into its environment, the infrastructure of the site has been accommodated with visual signage such as panels, and special traffic rules have been established.

This launch is a decisive step towards the development of a multimodal offer that integrates Level 4 fully self-driving vehicles, which provide real autonomy without an onboard safety operator under certain conditions, while ensuring the safety of passengers and other road users.

This experimentation brings an innovative technological dimension to the project by implementing connected infrastructures which allow the operator to be situated outside of the vehicle. The supervisor’s role consists of managing the operation of the vehicle from the remote supervision centre, which has been set up on site for this purpose.

This remote supervision centre, which has control-command interfaces accessible via a control box and screens, is able to:

In addition, the imminent adoption of new technologies will further increase the reliability and quality of these improved services. For example, 5G will considerably reduce latency and data transmission reliability. Collectively these improvements will reduce accident risk and lessen controller reaction time to unforeseen events.

The next steps to be taken include upgrading the skills of mobility service providers, developing additional technical functionalities, and pooling supervision resources. This will support a shift from managing one vehicle to managing a vehicle fleet, and from a single site to multiple sites. All this will be subject to meeting requirements for safety and operational reliability.

«The achievement of this fully autonomous level 4 service at the CNTS is a major step forward for our partners, and for autonomous driving in general. We are taking these steps one at a time, gradually increasing our level of technical expertise to meet increasingly ambitious challenges. Today, fully autonomous operations on closed sites are the first step in the progressive deployment of Level 4 autonomous mobility solutions, so that in the future we will be able to see them driving in more complex environments. »

«This first fully autonomous service at our test site in Châteauroux is a new key stage in the development of autonomous mobility services. Keolis is preparing for the deployment of full autonomy on open roads with the aim of guaranteeing optimum safety and quality of service for passengers, which remain our priorities as an operator. »

As a pioneer in the development of public transport, Keolis partners with public-sector decision-makers seeking to boost their regions’ attractiveness and vitality through shared mobility. As the world’s leading operator of automated metros and trams, Keolis relies on a sustained and open innovation policy with all its partners and subsidiaries – such as Kisio, EFFIA, Keolis Santé, and Cykleo – to strengthen its core business and develop new innovative and “tailor-made” shared mobility offers.

Since 2016, Keolis has carried out numerous experiments with long-term autonomous shuttles for public use: 8 in France (Paris La Défense and Roissy-Charles De Gaulle airport, Lyon Confluence and Olympique Lyonnais stadium, Nevers, Bordeaux, Lille and Rennes) and 10 in other countries (1 in the United States, 4 in Australia, 1 in Canada, 2 in Belgium, 1 in the United Kingdom and 1 in Monaco), thus enabling the Group to position itself as an expert in the operation of autonomous shuttles. By the end of July 2020, the Group had recorded approximately 105,000 km travelled and more than 200,000 passengers transported in autonomous shuttles, in France and the rest of the world.

Navya is a leading French name in the autonomous driving systems. With 280 employees in France (Paris and Lyon) and in the United States (Michigan), Navya aims at becoming the leading player for the supply of autonomous driving systems for passenger and goods transport. Since 2015, Navya has been the first to market and put into service autonomous mobility solutions. The Autonom® Shuttle, main development axis, was launched in September 2015 and nearly 170 units have been sold as of 30 June 2020, notably in the United States, France, Germany, Switzerland, Japan and Australia. The Autonom® Tract is dedicated to goods transport. Created in 2014 with the support of Robolution Capital, investment fund managed by 360 Capital Partners, his reference shareholder, Navya’s shareholders also include the Gravitation fund and Paris Region Venture Fund (Région Île-de-France) managed by Cap Decisif Management as well as Valeo and Keolis groups. Navya is listed on the Euronext regulated market in Paris (ISIN code: FR0013018041- Navya).