Posted in Press releases the 8 June 2021 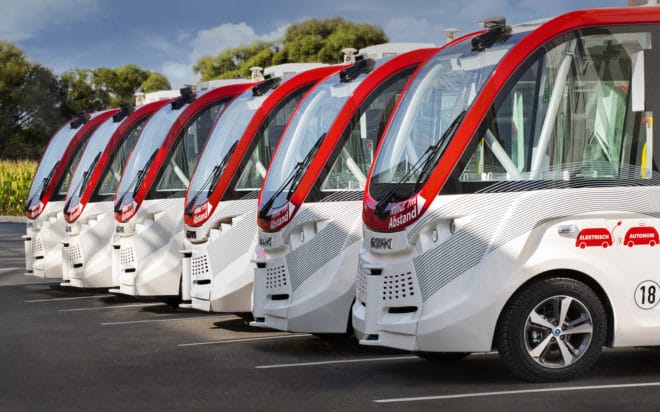 Germany is one of the main markets for autonomous vehicles worldwide1. In order to position itself as a pioneer of autonomous mobility solutions, Germany is the first country in the world to adopt a legal framework for level 4 autonomous vehicles, paving the way for numerous commercial applications. The new legislation adopted in May 2021, which allows driverless vehicles to operate in regular service on open road, will accelerate the development of the sector. The recent deployments confirm Navya’s development in Germany, based on experiments in complex environments and thanks to the collaboration of leading industrial players operating in Germany.

Navya has worked with Valeo Group and other partners in Germany, on the deployment of 6 Autonom® Shuttle within the framework of the SMO (Shuttle Modellregion Oberfranken) project. Spread over three cities in northern Bavaria (Hof, Rehau, Kronach), the shuttles, currently in the deployment phase, carry passengers on open road. They are equipped by Valeo with sensors and data acquisition tools, in addition to the components already present in Navya’s systems. In line with previous deployments, Navya has enabled the transfer of know-how through in-situ operators training. Navya autonomous driving systems are deployed on the following sites:

Prior to these experiments, Navya had been present in Germany through other projects, with nearly twenty deployments, including:

All of these services provide the inhabitants of the cities concerned with innovative mobility solutions that make their daily lives easier while reducing traffic and improving road safety.

“These new deployments within sites providing major technological challenges confirm Navya’s strong momentum on the German market and consolidate its position as the leading company for the supply of level 4 autonomous driving systems. As Germany initiates the world’s first regulation dedicated to autonomous vehicles, the numerous projects in which Navya is involved in this country are proof of the added value of our offer and the maturity of our technology supporting innovative mobility solutions. Alongside leading manufacturers such as Valeo, Navya’s long-standing partner in France and in Germany, the Company continues to develop its technology with the aim of offering a commercial solution for both goods and passengers transport”.

1 Source: KPMG’s “Autonomous Vehicles Readiness Index 2020” report. Germany retains the 4th place it held in the previous edition of the AVRI for technology and innovation, where it leads the measurement of innovation capacity and is one of the five countries with the highest score for industrial partnerships. Germany is 3rd for patents related to autonomous vehicles and for investments in companies related to autonomous vehicles.

Created in 2014, Navya is a leading French name specialized in the supply of autonomous driving systems and associated services. With 280 employees in France (Paris and Lyon), in the United States (Michigan) and in Singapore, Navya aims at becoming the leading player in level 4 autonomous driving systems for passenger and goods transport. Since 2015, Navya has been the first to market and put into service autonomous mobility solutions. The Autonom® Shuttle, main development axis, is dedicated to passenger transport. Since its launch, more than 180 units have been sold in 23 countries as of 31 December 2020. The Autonom® Tract is designed to goods transport. The Valeo and Keolis groups are among Navya’s historical shareholders.
Navya is listed on the Euronext regulated market in Paris (ISIN code: FR0013018041- Navya).
For more information visit: www.navya.tech/en