NAVYA announces the complete remodling of its Navya Drive® software, launching version "6.X" as the core of multi-platform deployments

Posted in Press releases the 15 December 2021 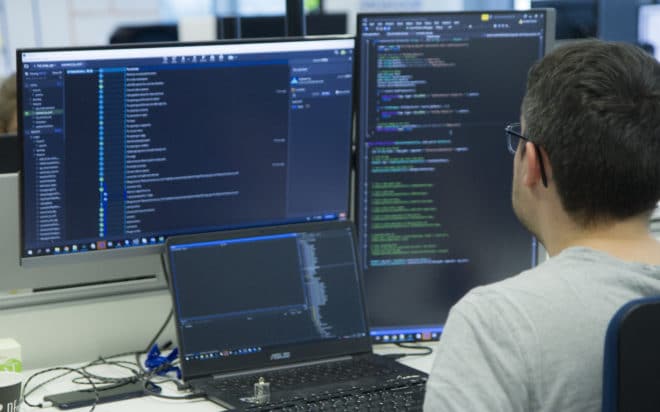 A redesign following the best technological and industrial standards

After two years of research and development, NAVYA is releasing its new and completely redesigned software version.This update, which has been already deployed on more than 20% of their vehicle fleet, benefits from a complete overhaul of the software architecture allowing:

This new “6.X” version of Navya Drive® rebuilds the software architecture in line with the best industrial standards. It will facilitate the next iterations available to customers and partners on all applications.

NAVYA is expanding its range of activities by securing and improving key operational functions, focusing on:

These improvements are already being seen in NAVYA’s day-to-day operations, providing greater flexibility in addressable use cases and time savings in the commissioning of its solutions on customer sites.

This new version of Navya Drive®, by becoming the core software for all applications, confirms NAVYA’s technological leadership and its strategic positioning as a provider of autonomous driving applications, whether for people or goods transportation

«The launch of the new “6.X” version of Navya Drive® software is a major technological breakthrough that reinforces the differentiating character of our solutions. Our proprietary software, consolidating more than six years of experimentation and based on a new basic architecture, allows a modularity of applications adapted to various use cases. This internationally recognized and proven know-how demonstrates NAVYA’s technological leadership in the design and development of level 4 autonomous mobility systems ».

Created in 2014, NAVYA is a leading French name specialized in the supply of autonomous mobility systems and associated services. With 280 employees in France (Paris and Lyon), in the United States (Michigan) and in Singapore, NAVYA aims at becoming the leading player in Level 4 autonomous mobility systems for passenger and goods transport. Since 2015, NAVYA has been the first to market and put into service autonomous mobility solutions. The Autonom® Shuttle, main development axis, is dedicated to passenger transport. Since its launch, more than 180 units have been sold in 23 countries as of 31 December 2020. The Autonom® Tract is designed to goods transport. Engaged in an ambitious CSR approach, the Company has an active policy in this area, as illustrated by the obtaining of the ISO 9001 certification in September 2021. The Valeo and Keolis groups are among NAVYA’s historical shareholders.