NAVYA participates in the Future Investment Initiative conference in Saudi Arabia, and confirms its leadership ambitions for the Gulf region

Posted in Press releases the 28 October 2021 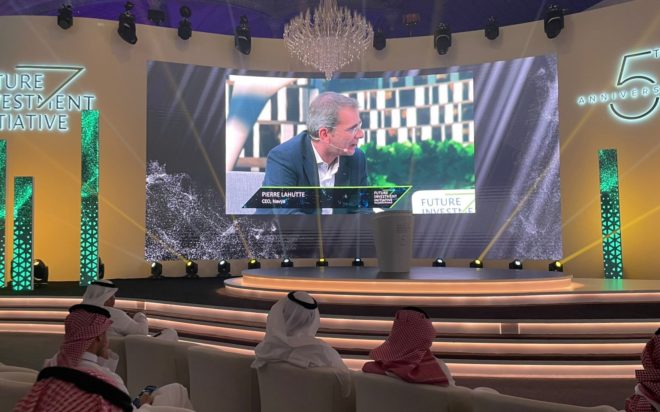 The Future Investment Initiative is a next-generation non-profit foundation dedicated to gathering and fostering ideas to solve the challenges facing humanity today with the most advanced and sustainable technologies.

Pierre Lahutte, CEO of NAVYA, took part today in the session “Silent progress: Investing in electric transportation” dedicated to the challenges of electric mobility. Alongside other innovative stakeholders such as Virgin Hyperloop, the electric cars manufacturer Canoo and the electric air mobility company Lilium, he had the opportunity to intervene on the following topics: future innovations in electric mobility, the potential and perspectives of this market and the environmental concerns arising from dependence on fossil fuels.

According to the International Energy Agency (IEA), while global vehicle sales declined by 6% in 2020, sales of electric vehicles increased by 41% over the same period, reaching over 3 million units. Electric vehicles are increasingly demanded for both environmental and economic reasons, a trend that could radically change the mobility development model in the years to come. In that respect, at the opening of the Saudi Climate Conference on October 23, the chairman of the Royal Commission for the City of Riyadh announced the goal of 30% of electric vehicles by 2030.

“With our participation to this event in Riyadh, 2 years after winning two awards at the Dubai World Challenge for Self-Driving Transport, NAVYA confirms the strategic importance of the Arabian Peninsula for the deployment of the first commercial-scale fleets of autonomous electric shuttles. Considering the proliferation of projects in this region and the Saudi Kingdom’s “Vision 2030”, we estimate the potential for autonomous mobility in hundreds of vehicles over the next few years. Therefore, our presence was also an opportunity to exchange with local partners able to facilitate the realization of these opportunities. “

Created in 2014, NAVYA is a leading French name specialized in the supply of autonomous mobility systems and associated services. With 280 employees in France (Paris and Lyon), in the United States (Michigan) and in Singapore, NAVYA aims at becoming the leading player in level 4 autonomous mobility systems for passenger and goods transport. Since 2015, NAVYA has been the first to market and put into service autonomous mobility solutions. The Autonom® Shuttle, main development axis, is dedicated to passenger transport. Since its launch, more than 180 units have been sold in 23 countries as of 31 December 2020. The Autonom® Tract is designed to goods transport. Engaged in an ambitious CSR approach, the Company has an active policy in this area, as illustrated by the obtaining of the ISO 9001 certification in September 2021. The Valeo and Keolis groups are among NAVYA’s historical shareholders.
NAVYA is listed on the Euronext regulated market in Paris (ISIN code: FR0013018041- Navya).
For more information visit: www.navya.tech/en