NAVYA signed a memorandum of understanding with ESMO Corporation 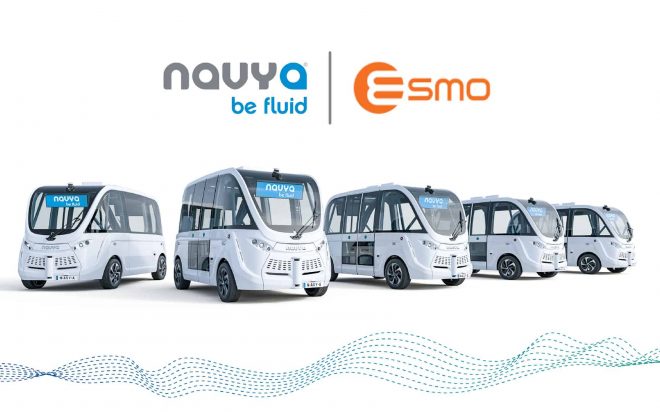 To build a strategic partnership to address the North East Asia market, NAVYA signed a memorandum of understanding with ESMO Corporation
Commitment by ESMO Corporation to subscribe to bonds repayable in cash or into new or existing shares (ORNANE) for a total consideration of€20 million

Villeurbanne, France, June 28, 2019 – 8:00 am CEST – NAVYA (FR0013018041- NAVYA), a leading company in autonomous driving systems, signed a Memorandum of Understanding with ESMO Corporation (073070:KS) to build a strategic partnership to address the North East Asia market including South Korea, Japan and China. Concurrently with this agreement, NAVYA agreed on a private placement, in the form of bonds repayable in cash and/or new/existing shares (the “Bonds”) to be fully subscribed by ESMO Corporation, for a total consideration of €20 million. Upon conversion of the Bonds, ESMO Corporation would become the second largest shareholder of NAVYA, holding approximately 20% of NAVYA share capital.

The proceeds raised through the issuance of the Bonds will be used to develop the research and development activity for existing autonomous driving systems imbedded in shuttle and cab prototypes. They will also contribute to the Company’s deployment of commercial and marketing resources in France and abroad, particularly in South Korea, a high-potential market on which NAVYA will benefit from the support of ESMO Corporation.

Concurrently with this financial agreement, NAVYA and ESMO Corporation signed a Memorandum of Understanding for:

the operational support and distribution of NAVYA products in exclusivity for South Korea and in some Asian countries namely Japan and China,
the joint development of R&D activities, and
an industrial partnership to optimize production costs.

Etienne Hermite, CEO of NAVYA, says: “We are pleased with this private placement, and would like to warmly thank our new partner for its trust and long-term commitment that confirms the added value of our mobility solutions on a high-potential market. This financing will enable us to sustain NAVYA’sfuture deployment for our activities overseas, and notably on the Korean market. We are veryenthusiastic about this new partnership, which is perfectly in line with our teams’ culture of sharing expertise and know-how”.

Jeong Hun KIM, CEO of ESMO Corporation, comments: “We are delighted to be accompanying the international development of NAVYA, a reference player in the field of autonomous mobility. We have been familiar with NAVYA and the quality of its technology for some years now, and firmly believe that its autonomous vehicles have decisive advantages that will allow it to become a major player on its market”.

NAVYA intends to issue, in a reserved transaction to ESMO Corporation, 20 bonds repayable in cash and/or new/existing shares for an aggregate amount of €20 million with a 5-year maturity. Conversion ratio for the Bonds has been set at €2.75. Upon conversion of its Bonds, ESMO Corporation will be entitled to 7,272,727 existing or newly issued shares representing approximately 20% of NAVYA’s sharecapital.

The Bonds will not be listed and not transferable for a 3-month period following their issuance.

The Bonds are convertible at any time after a 12-month period, at the bondholders’ initiative, one Bond being converted into 363,363.36 NAVYA new/existing shares. NAVYA may also request the conversion of the Bonds at any time and at its option, from the third-year anniversary of the issuance, if the daily volume-weighted average share price on Euronext Paris over a six-month period exceeds€5.00.

An application will be made periodically to list on Euronext Paris the new shares issued upon exercise of the conversion rights. They will be immediately fungible with existing shares, already traded on Euronext Paris and tradable upon their admission on the same listing line as the existing shares under the ISIN Code FR0013018041. They will also be subject to the risks listed in chapter 4 of the registration document registered with the Autorité des Marchés Financiers on 5 June 2018 under number I. 18-048, and in the 2018 annual financial report dated of 30 April 2019. NAVYA confirms the absence of any change in liquidity risk compared to the statement in the 2018 annual financial report dated 30 April 2019.

The Bonds will bear an annual interest rate of 3%, and, if not converted, shall be repaid in cash on the fifth anniversary of their issuance.

The contemplated operation will further strengthen NAVYA’s cash position following the drawing, in March 2019, of the first tranche of the financing agreed with the European Investment Bank.

It is intended that ESMO Corporation will be represented on NAVYA’s supervisory board subject to NAVYA’s shareholders’ approval.

The transaction is supported by Robolution Capital, investment fund managed by 360 Capital Partners, holding 37.6% of the share capital and 37.6% of voting rights of NAVYA, which has committed to vote in favor of such transaction during NAVYA’s shareholders’ meeting.

This private placement is subject to NAVYA shareholders’ approval as well as obtaining a waiver from the European Investment Bank, according to the financing agreement signed in August 2018 andgoverning the first €15 million tranche drawn early 2019.

This agreement shall be terminated if the conditions precedent are not satisfied and the investment is not consummated at the latest on 30 September 2019, or by mutual consent of ESMO Corporation and NAVYA.

Calendar of the operation

NAVYA will submit the transaction to its shareholders approval and will therefore convene at the earliest possible a shareholders meeting.

Once all conditions precedent are met, notably obtaining the waiver from the European Investment Bank, the funds will be received and the Bonds shall be issued within 5 business days.

NAVYA is a leading French name in the autonomous driving systems. With more than 290 employees in France (Paris and Lyon) and in the United States (Michigan), NAVYA aims at becoming the leading player for the supply of autonomous driving systems for passenger and goods transport. Since 2015, NAVYA has been the first to market and put into service autonomous mobility solutions. The AUTONOM® SHUTTLE, main development axis, was launched in September 2015 and more than 130 units have been sold as of 30 June 2019, notably in the United States, France, Germany, Switzerland, Japan and Australia. The AUTONOM® TRACT, whose first road tests will start shortly, is dedicated to goods transport. Created in 2014 with the support of Robolution Capital, investment fund managed by 360 Capital Partners, his reference shareholder, NAVYA’s shareholders also include the Gravitation fund and Paris Region Venture Fund (Région Île-de-France) managed by Cap Decisif Management as well as Valeo and Keolis groups.

This document may contain certain statements reflecting estimates, forecasts and expectations that constitute forward-looking information. By their nature, these statements are subject to a number of assumptions and entail known and unknown risks and uncertainties as they relate to events and depend on circumstances that will occur in the future. The known risks are those discussed or identified in Chapter 4, “Risk Factors” of Navya’s registration document which is available on the company’s website (https://navya.tech). The actual results and developments could differ materially from those expressed or implied by these statements and there can be no assurance that these statements will prove to be accurate. The past performance of Navya and its subsidiaries cannot be relied on as a guide to future performance. These forward-looking statements should be used with caution and circumspection and in no event can Navya or its management be held responsible for any investment or other decision based upon such statements. These forward-looking statements only reflect Navya’s view as of the date hereof and the company expressly disclaims any obligation or undertaking to release any update thereto. The information in this document does not constitute an offer to sell or an invitation to buy shares in Navya or an invitation or inducement to engage in any other investment activities. 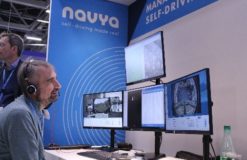