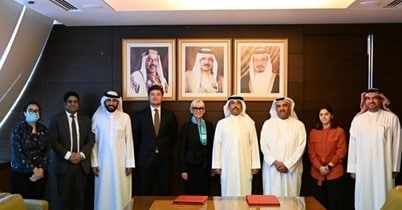 Villeurbanne, France, June 24th, 2022 – 07:30 CEST – NAVYA (FR0013018041- Navya), an autonomous mobility systems leader, has signed on the 23/06/2022, at the Bahraini Ministry of Transport and Telecommunications in Manama, an agreement with the Ministry of Transport and Telecommunication of the Kingdom of Bahrain, to support the implementation of autonomous vehicles in Bahrain.

MTT responsibility is to enhance and regulate affairs in these areas, propelling the Kingdom through leading projects such as the Bahrain Metro Project, or the Bahrain Airport Modernization Program.

The agreement was signed by Ms. Sophie Desormière, CEO of Navya, and Nada Yousif Deen, Assistant Undersecretary for Land Transportation, under the supervision of H.E. Mohammed bin Thamer Al-Kaabi – Bahrain Minister of Transportation and Telecommunications.

The agreement between NAVYA and the MTT has for goal to help the Ministry to diversify the modes of public transport in the country, by facilitating the implementation of Autonomous vehicles for the transportation of people, in order to enhance Bahrain’s economic position and regional standing.

Navya will support the MTT by sharing its experience, and best practices used on projects conducted worldwide, toward implementation of regulation and policies for Autonomous vehicles.

Moreover, Navya will support on the feasibility study of use cases identified through the Kingdom, focusing mostly on smart city use cases, airports, industrial sites and campuses.

Navya will provide value-added analyses and support, suggesting plans for implementation, to facilitate the breakthrough of Autonomous and electric vehicles in the Kingdom.

“The visionary approach adopted by the Kingdom of Bahrain envisages a future which fosters sustainable development built on the basis of an inclusive and connected society. The ambitious transportation program, in accordance with Bahrain’s Economic Vision 2030, with its multitude of large projects covering all segments of mobility, should bring about a spectacular transformation in the coming years. With the increase in the volume of passengers and freight on its roads and in its ports and airports, the Kingdom of Bahrain has shown is willingness to adopt the latest technologies and to steer its investments toward top-flight innovations which provide a fluid mobility experience with a reduced carbon footprint. The agreement between the Bahraini Minister of Transportation and Telecommunications and NAVYA will enable the realization of the Kingdom’s vision and provide a basis to work together to identify numerous use cases for self-driving shuttles and their deployment, thus facilitating mobility for the benefit of all and improving the public transportation network. The agreement also represents recognition of NAVYA’s expertise and confirms its undisputed leadership throughout the Arab Gulf States.”

NACreated in 2014, NAVYA is a leading French name specialized in the supply of autonomous mobility systems and associated services. With 280 employees in France (Paris and Lyon), in the United States (Michigan) and in Singapore, NAVYA aims at becoming the leading player in Level 4 autonomous mobility systems for passenger and goods transport. Since 2015, NAVYA has been the first to market and put into service autonomous mobility solutions. The Autonom® Shuttle, main development axis, is dedicated to passenger transport. Since its launch, more than 200 units have been sold in 25 countries as of 31 December 2021. The Autonom® Tract is designed to goods transport. Engaged in an ambitious CSR approach, the Company has an active policy in this area, as illustrated by the obtaining of the ISO 9001 certification in September 2021. The Valeo and Keolis groups are among NAVYA’s historical shareholders.
NAVYA is listed on the Euronext regulated market in Paris (ISIN code: FR0013018041- Navya).
For further information, visit our website: www.navya.tech