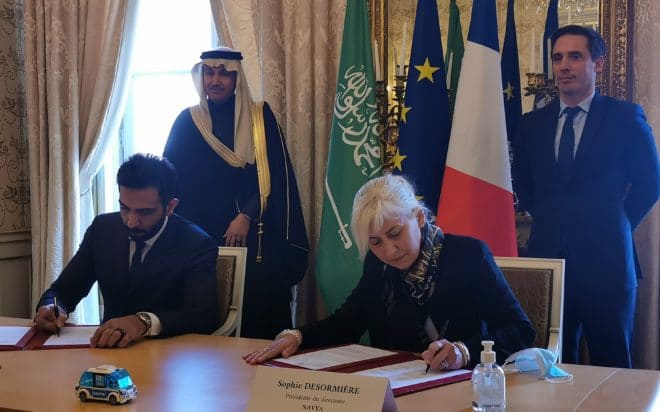 Villeurbanne, France, March 10th, 2022 – 7:30 pm CET – NAVYA (FR0013018041- Navya), a leader in the field of autonomous mobility systems, has signed today at the French Ministry of Transport in Paris an agreement with the Ministry of Transport and Logistic Services of the Kingdom of Saudi Arabia to support the implementation of autonomous vehciles in the Kingdom of Saudi Arabia.

The agreement aims at implementing pilot projects, validating use-cases, defining regulation, and building up local competencies in order to prepare and speed up the large-scale deployment of fleets of level 4 autonomous vehicles over the whole of the Arabian Peninsula. It will support the Kingdom of Saudi Arabia, which is already a smart cities pioneer, to become one of the first markets in the world to deploy large shuttle fleets on its territory.

The carbon-free, shared fleets will play an essential role in the building of cities of the future, providing clean air and a better quality of life, in accordance with the Kingdom of Saudi Arabia’s “Vision 2030”.

The final agreement, together with the support provided by the Kingdom of Saudi Arabia, will enable NAVYA to take its research and development to a higher level with the development of new first and last mile use cases in town centers, smart cities, airports, theme parks and industrial sites.

« NAVYA is a pioneer in autonomous electrical road shuttles, bringing sustainable and high quality services to people and communities all over the world. Autonomous mobility is beginning to scale and will be a game changer in public transportation, with more services, comfort and safety for smart cities and less dense areas. I am particularly enthusiast about the reinforced collaboration between NAVYA and the Ministry of Transport and Logistic Services of the Kingdom of Saudi Arabia, and look forward to seeing the concrete projects that will result from this agreement. »

« Signing the MoU represent another testimony for the depth of the Saudi-French collaboration in the Transport and logistics sector. The Ministry of Transport and Logistic Services has a commitment to enable the adoption of new mobility and technologies across all modes, as part the Sector National Strategy to be a futuristic sector and a model of seamless mobility. Such a collaboration with NAVYA, will allow for leading companies to support Saudi in ensuring the right and timely regulatory frame works are in place to allow for wide-scale adoption in the future and early piloting of autonomous and connected transportation across the Kingdom. Which will be essential to drive investments in the Saudi Transport and Logistics sector in new technologies, and improve the quality of the mobility in Saudi cities. »

« We look forward to the start of a fruitful collaboration with the Kingdom of Saudi Arabia to speed up the deployment of new fleets for people and goods and to contribute to the building of an autonomous and shared future. Ecological and connected transportation will not only advance mobility, but also benefit the whole community. The agreement will bring us closer to achieving our vision of the mobility of the future on a large scale. »

Created in 2014, NAVYA is a leading French name specialized in the supply of autonomous mobility systems and associated services. With 280 employees in France (Paris and Lyon), in the United States (Michigan) and in Singapore, NAVYA aims at becoming the leading player in Level 4 autonomous mobility systems for passenger and goods transport. Since 2015, NAVYA has been the first to market and put into service autonomous mobility solutions. The Autonom® Shuttle, main development axis, is dedicated to passenger transport. Since its launch, more than 200 units have been sold in 25 countries as of 31 December 2020. The Autonom® Tract is designed to goods transport. Engaged in an ambitious CSR approach, the Company has an active policy in this area, as illustrated by the obtaining of the ISO 9001 certification in September 2021. The Valeo and Keolis groups are among NAVYA’s historical shareholders.