Posted in Press releases the 6 September 2022 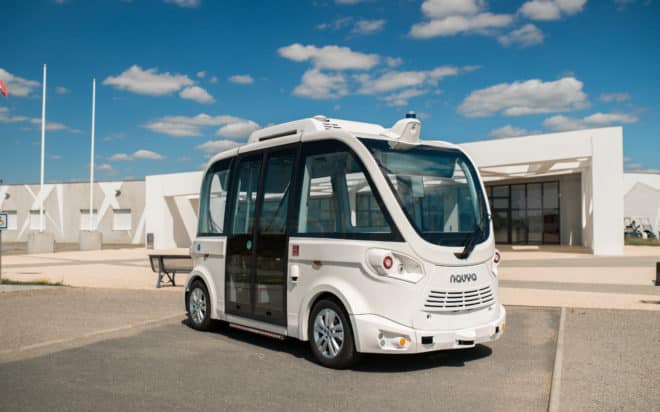 Villeurbanne, France, September 6th 2022 – 07:30 am CEST – NAVYA (FR0013018041- Navya), an autonomous mobility systems leader, has put its signature to the sale of an EVO shuttle to Landkreis Kronach. The district of Kronach is in the German federal state of Bavaria. It is the third shuttle to be ordered by the Landkreis Kronach, and comes as an addition to the two ARMA shuttles which were acquired within the framework of the SMO (Shuttle-Modellregion Oberfranken) project.

The SMO project brings together twelve partners, including the equipment supplier Valeo and the operator Omnibusverkehr Franken GmbH (a subsidiary of Deutsche Bahn), and is the impetus behind the deployment of six Navya self-driving shuttles over the three north Bavarian towns of Hof, Kronach and Bad Steben, as well previously Rehau.

The two ARMA shuttles that were acquired within the framework of the project by Kronach are still operating on the town’s roads, creating a new public transportation service that links the town’s main places of interest. The three kilometers of open road that make up its route starts at the station, takes in the car parks situated in the town center, and then travels across the upper part of the town to the fortress, Festung Rosenberg.

The acquisition of the new EVO self-driving shuttle will enable the current route to be extended as far as Kronach castle, which is the town’s main attraction. This new extension is designed to enable tourists to travel around the town with ease, but it will also be of benefit to all the residents of Kronach, who will see the possibilities offered by shared mobility multiply within their town.

The new order also demonstrates German’s market dynamism in terms of autonomous passenger transportation. To date twenty Navya shuttles have been sold in Germany, including two EVOs at the end of 2021, which will be put into operation in October 2022 to serve the thermal spa of Bad Staffelstein within the project MILAS.

« Following the acquisition of two Navya ARMA self-driving shuttles, we are pleased to offer our residents and visitors a new public transportation service from the station to the castle. We consider it important to be able to offer them an innovative service which responds to their last mile needs. We are aware that soft mobility represents a crucial challenge throughout the regions and this is why we are stepping up our self-driving shuttle services within the town of Kronach. At the same time, we are pleased to introduce the brand new Navya model which contains a large number of new developments, not only technological but also with passenger comfort in mind »

« The new order confirms how self-driving shuttles have become a useful part of life in the regions and is living proof of the quality of our deployments and partnerships. Following what was essentially a trial period, we have noticed our customers’ growing interest in making our shuttles a permanent fixture and also to extend their networks by means of new acquisitions. We are moving step by step from thinking in terms of trial runs to a rationale of acquisition and expansion, which is the sign of how self-driving shuttles have found their rightful place as a sustainable and shared mobility solution.” »